Another tricky situation for Mister Miracle, created by Warwick Johnson Cadwell to celebrate our first anniversary. Thanks Warwick, you’re a true gent.

Today marks the 92nd anniversary of Jack Kirby‘s birth and to celebrate KIRBY-VISION proudly presents a portrait gallery in honour of ‘The King of Comics’. First up we have emmy award nominated puppeteer Steve Sherman. As inker/letterer for the majority of Jack’s work throughout the 70’s and 80’s, Mike Royer, is well known to fans of the site. My thanks to Mike for his permission to use this portrait and to Rob Steibel for submitting the commisioned artwork.

KIRBY-VISION would like to send out a huge thank you to all the artists who took the time to contribute to the gallery. Despite looming deadlines and moving houses (and other such excuses) you really pulled out all the stops to pay tribute to Jack’s inspiration. 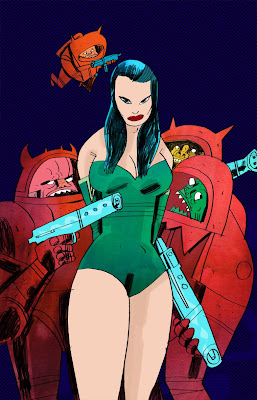